In recent weeks, states have renewed their vows to mitigate the impacts of climate change by upholding the greenhouse gas (GHG) reduction targets outlined in the Paris Agreement. Among the dozen states that have joined the U.S. Climate Alliance are Connecticut, Massachusetts, New York, and Rhode Island, four northeastern states that have set goals of reducing GHG emissions 80 percent below 1990 levels by 2050. (Connecticut has set its baseline at 2001, not 1990.)

These states have also targeted renewable thermal technologies (RTTs) as a means of reducing emissions—a noteworthy effort because heating and cooling of buildings represent about one-third of their total energy consumption. At the residential level, heating and cooling can make up over half of a household’s energy use; in Massachusetts, where energy costs are slightly below the New England average, 59 percent of energy consumption is attributed to heating alone. But despite the significant potential of renewable heating and cooling, only a fraction of the market is economically viable under current pricing and market conditions.

Why is this the case? And how might it change? To help answer those questions, it’s useful to understand the policies that got us to where we are today.

Where did we come from?

Connecticut does not have a long history of offering rebates or other incentives that target RTTs. Since 2007, there have been sales tax exemptions for geothermal and solar water heating technologies, but there has been little else that explicitly brings down upfront costs. The Feasibility of Renewable Thermal Technologies in Connecticut (FORTT) project seeks to inform the development of new RTT programs in the near future by analyzing market barriers and customer types and estimating technical and economic potential.

Massachusetts, through the Department of Energy Resources (DOER), first published its guiding strategy document on RTTs in 2014, three years ahead of the other states profiled here. The Commonwealth Accelerated Renewable Thermal Strategy (CARTS) report paved the way for greater interest and investment in RTT by highlighting opportunities by customer class, customers’ building types, and primary heating and cooling fuels used in buildings. Presently, investments through the Massachusetts Clean Energy Center (MassCEC) showcase the direction the state has moved to reduce upfront capital costs for RTT technologies.

New York, like Massachusetts, also has a history of offering incentives for RTTs:  it has provided $28 million for ground-source heat pumps (GSHPs) and air-source heat pumps (ASHPs) over the last 15 years and $10 million for high-efficiency biomass since 2014. But the state’s latest analysis focused on comparing the efficacy of cold climate air-source heat pumps (ccASHPs), GSHPs, and solar water heaters.  The analysis identified several existing programs that can be adapted to incorporate consideration for RTTs; most notably, it recommends creating a data-driven tool to lower soft costs for future installations by helping contractors identify communities where they can pursue multiple projects at once. (Soft costs refer to costs unassociated with hardware, such as those incurred searching for new installation sites and customers.)

Rhode Island’s renewable energy and climate change mitigation and adaptation efforts are guided most recently by Executive Order 15-17, “State Agencies to Lead by Example in Energy Efficiency and Clean Energy.” This cites the global commitment to limit global warming issued that year in Paris as a driver and calls for the State to procure 100 percent of its energy demand from renewable sources by 2025. The Office of Energy Resources is co-charged with fulfilling this executive order. And while Rhode Island has not offered many incentives or rebate programs in recent history, the executive order and market development strategy suggest that funding and stakeholder interest are mobilizing.

Where are we headed?

Among the barriers to widespread market penetration are consumer awareness and high upfront costs. Heating and cooling in general is not a service that homeowners and building operators engage with on an intimate level. And because people generally just consider their heating and cooling systems when something has broken, emergency replacements leave little room for a thorough evaluation of cost-effective opportunities. Customer sensitivity to the upfront costs of new heating and cooling systems appears to be rather elastic, meaning any increases in price will see a decrease in demand, and behavioral studies suggest cost savings need to be not only transparent but also dramatically higher in order for customers to seriously consider investments in energy efficiency.

To combat aversion to RTTs due to high upfront costs, the states’ reports all evaluate how to reduce these costs through alternative financing opportunities. (Traditionally, customers provide all the capital to install an RTT system.) One heating and cooling program piloted in New York, called HeatSmart Tompkins, suggests that a “Thermalize” campaign for RTTs similar in structure to the Connecticut Green Bank’s “Solarize” campaign for photovoltaic technologies could be promising. Such programs include consumer awareness initiatives as well as targeted project bundling, which reduce contractor costs.

Connecticut has been able to leverage the Connecticut Green Bank (CTGB) to deliver programs like Energize CT (in cooperation with Eversource and United Illuminating) to help households transition to energy sources with lower GHG emissions rates. The CTGB uses financing as a tool to leverage private capital in increasing RTT deployment and sees subsidies as a market kick-start rather than a long-term solution.

The need for more data

The greatest missing link for program administrators and policymakers is data availability. The RTT industry, following the structure of the heating and cooling industry, is decentralized; no one administrator is able (or perhaps incentivized) to consistently collect and report market data on rate of installs, especially as contractors work across state lines. Therefore, public information on system sizes, geographically-specific installations, and cost cannot be easily analyzed to guide state policies.

Additionally, at a high level, Connecticut, Massachusetts, New York, and Rhode Island all have similar RTT objectives: reduce soft costs associated with RTT installations, create policies and mandates that incentivize investment in RTT, and increase awareness about the benefits of RTTs. Each state, meanwhile, has a slightly different set of policy tools at its disposal to address the various market failures. The greatest differences between how the states are approaching their RTT market strategies lies in past policies. Some have long-standing incentives programs for select RTT technologies, others are formalizing a state RTT strategy, and several are evaluating ccASHPs for the first time due to recent improvements in this technology. Opportunities for collaboration include sharing best practices and tools among contractors to reach appropriate customer classes, and coordinating incentive structures through trainings with contractors who work across state lines.

Moving forward, we see data availability being among the greatest forces for helping states set rebate levels, connect communities with local installers, and measure progress. The benefits of data availability and information dissemination can be seen in the appliance efficiency market, where the U.S. Department of Energy and Environmental Protection Agency have established widely publicized product databases for stakeholder reference (ENERGY STAR). A similarly accessible database for RTTs, permitting information, and contractor expertise could rapidly catalyze market penetration and growth in consumer confidence and awareness surrounding these technologies. The Renewable Thermal Alliance, a conglomeration of stakeholders in the Northeast region since 2016, spanning state administrators, contractors, and utilities, is well positioned to coordinate the development of a meaningful database that tracks installations and aggregates incentive data. 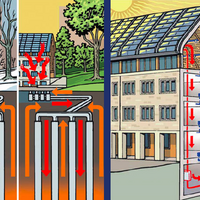