The future of food is seriously thinking about plant-rich diets. In early September, a group of more than 400 leaders from across the entrepreneurship, investment, corporate, academia, non-profit, and public spaces came together to discuss a growing new impact field—plant-based foods and clean meat. As the Good Food Conference website said, these are two technologies that are going to allow the world to sustainably and responsibly feed the expected 10 billion people by 2050.

Plant-based foods currently compose a $3.7 billion market, according to the Good Food Institute, the non-profit that organized this first major conference of the industry. With the replacement of animal products comes the replacement of animal agriculture’s effects on greenhouse gas emissions, habitat loss, pollution and animal welfare abuses. It also comes with a hope for food security and food safety.

Half of the conference took place around clean meat, the term that has been used recently for cultured or lab-grown meat. What makes the meat clean is that it is grown in sanitary laboratory environments, free of the antibiotics and animal waste of traditional meat production. Cells are taken from an animal and replicated in a lab in order to produce meat.

The name has been controversial, though, frequently targeted by the meat industry as a misleading marketing attempt. To address those issues and work more closely with major meat companies and regulators, many of clean meat companies decided at the conference to move forward with the name cell-based meat.

Regardless of the name, this field will bring interesting ethical and moral questions along with massive opportunities. One of the sessions focused on the religious considerations around clean meat. Nathaniel Popper of the New York Times led a discussion with Rabbi Gavriel Price of the Orthodox Union and Muhammad Munir Chaudry, the President and CEO of the Islamic Food and Nutrition Council of America, on whether clean meat would fulfil kosher and halal criteria. Both are important considerations the field will have to think about for global markets.

Clean meat is not currently in the market in any form as costs are being brought down. One company, Just, is hoping to have a product in the market by the end of 2018. There are 26 other companies working the space developing products as varied as ground beef to tuna.

Going from Land to Sea

With the release of a Good Food Institute report and a session with Sylvia Earle, the conference also highlighted the growing field of plant-based and clean seafood. Earle, a living legend in the marine conservation field, came on stage to discuss her hopes for food technology and innovation to address major issues around overfishing.

Sharing her hope for the future of plant-based and clean seafoods replacing our current status quo around seafood that does not consider what we take out of the system, Earle said “In a world that is rightly so concerned about climate change and the atmosphere, to be so ignorant and neglectful of our oceans is deeply troubling. However, having woken up to this living disaster…it’s not too late to turn things around.”

Alternative seafoods are newer and face unique challenges and opportunities from other alternative proteins. Major startups in the space (Good Catch, Terramino Foods and Ocean Hugger) have only been around since 2016, and there are a number of clean meat companies starting to work on seafood.

From an ongoing discussion with the federal government on labelling to responses towards a recent Missouri restriction on clean meat, the policy and legal considerations around plant-based foods were another major topic at the conference. Yale SOM alum of Honest Tea and the Executive Chairman for Beyond Meat, Seth Goldman, sat on a panel around a clear policy and regulatory path forward. To learn more about updates on this, visit the Good Food Institute Blog.

The conference closed out with a session dedicated towards the environmental and social impacts that the plant-based foods and clean meat industry are having. Pat Brown of Impossible Foods shared that he started the company “to save the world,” with many of Impossible’s reports highlighting their desire to curb habitat loss due to meat consumption. Livestock production is one of the leading causes of habitat loss around the world.

This industry has made major leaps forward in a short amount of time for its market presence and in addressing the replacement of foods for prevention of more damage from animal agriculture. The hopeful road ahead will also lie in thinking about the restoration of what we have already lost from animal agriculture and how to further bring sustainability into our food system through plant-based foods. 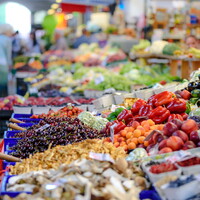