The popularity of solar energy skyrocketed in South Carolina (SC) with the introduction of net metering in 2014 when the state legislature unanimously passed its landmark energy bill. Act 236, also known as the Distributed Energy Resources (DER) program, which created a net-metering system permitting residential and small-commercial utility customers who install photovoltaic arrays to get credit for excess power sent back to the grid.

After the introduction of DER, the Palmetto State went from having virtually no solar energy to having an installed capacity of 591 megawatts (MW). Statewide, an estimated 64,865 homes are currently powered by solar energy and approximately 3,000 people depend on solar-related jobs for income. With the legislature on its side, the state appeared to be an unstoppable giant ready to fully participate in the solar energy revolution.

Funded by the US Department of Energy, the Solar Energy Evolution and Diffusion Studies II (SEEDS II) Yale research project is tasked with understanding strategies and messages that support the adoption of solar energy, especially among low- and moderate-income (LMI) customers.  To do this, the Yale School of Forestry and Environmental Studies has partnered with Duke University, the CT Green Bank, and non-profit SmartPower to conduct a series of rigorous controlled field trials that explore what motivates residential solar installation.

In 2017 and 2018, SEEDS II conducted Solarize campaigns in Connecticut, Massachusetts, Rhode Island, New York, and South Carolina. The campaigns had varying degrees of success, but South Carolina stood out as a clear outlier with the lowest adoption rates.  Along with SmartPower, the Yale team analyzed the reasons behind these results to understand why an apparently unstoppable giant-in-the-making performed poorly.

During Q2 and Q3 of 2018, SmartPower facilitated a series of pilot programs in SC. Through on-the-ground community outreach, engagement of solar ambassadors and community leaders in Solarize communities, and utilization of traditional and social media, SmartPower led Solarize campaigns in 11 towns. The purpose of these campaigns was to examine strategies for encouraging solar development in LMI communities. The campaigns promoted both residential solar and community shared solar projects. Residential solar implies onsite PV arrays that supply power to one household. Community shared solar can be described as a PV array where the electricity produced is shared by the community or by more than one household.

For residential solar, SmartPower reached 7,225 homeowners. Of these, 138 people showed further interest, and 9 contracts were signed. Interest was greater in community shared solar, which opens the opportunity to “go solar” for people living in rental homes, apartments, condos, and homes that are unsuitable based on geographic or space constraints. Community shared solar in SC is managed by the utilities. During the Solarize campaigns, demand for community solar was strong, but after the successful installation of a few arrays, the utilities did not have any more projects available for immediate signing of contracts. Regardless,130 people signed up to be on the waitlist for future community solar projects and seemed willing to wait for the approval of new projects.

Several findings emerged from our web-based survey of SC community members who expressed interest in solar implementation: A) concern for the environment is the main reason people in South Carolina choose to adopt solar; B) people are willing to wait a long time to purchase solar from a community shared solar installation; and C) nuclear abandonment in SC is of great concern. Many people believe it may lead to higher electricity rates. The abandonment of the V.C. Summer Nuclear Generating Station followed by a year of charges to energy consumers to recuperate the investment has also created distrust in the utility companies. 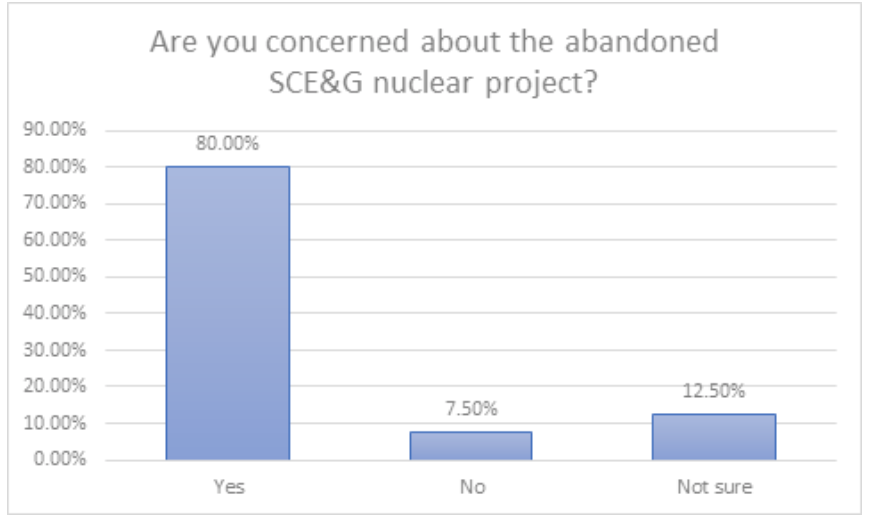 In collaboration with SmartPower, the Yale team has identified four main challenges faced by the Solarize campaign.

While the state legislature initially created powerful incentives around solar with DER, the legislation had a catch, in that utilities could cap the net metering program once solar produced 2 percent of peak power production. This 2 percent was reached in three years (faster than forecasted) and both Duke Energy and SCE&G put a stop to further net metering. Homeowners could still install solar but the rates and ROI would be unfavorable. Earlier this year, bill H.4421, which would have removed the cap on net-metering and opened the market to large-scale solar, received a 61-44 majority vote by the SC House of Representatives. The bill lacked the required 2/3 majority and failed to advance in state congress.

The removal of financial incentives from Duke and SCE&G and the termination of new net metering connections significantly decreased the economic attractiveness of solar. With no net metering, average savings/month were $8-$10 for a 7-kW system, and homeowners could not produce more energy than they used. Economic incentives were even worse for community shared solar.

Non-profit co-ops in SC were developed decades ago to extend power lines from utility companies and provide a solution to the lack of electrification in rural areas. Nowadays, 20 electric co-ops cover the state in a polka dot fashion. From one side of the street to the other, homes are sometimes served by either a different utility company or by a co-op. Every co-op has rules regarding solar and very few of them are eager, or even willing, to accept solar installations. Even though SmartPower tried to address this issue, the patchwork service territories create particular challenges, as customers at outreach events often get their energy from diverse sources despite living in the same town. The scattered nature of service territories also presents a challenge for the consumer, as getting information on solar installations is not streamlined.

In 2008, SCE&G, announced jointly with Santee Cooper that it would build the second and third reactors for the V.C. Summer Nuclear Generating Station. Construction was to begin in 2012, unit 2 was to be completed by 2016, and unit 3 by 2019. To support the construction, SCE&G requested a total of 9 electric rate hikes, which the Public Service Commission (PSC) approved.

SCANA, SCE&G’s parent company, and Santee Cooper did not break ground until a year after scheduled. Soon after, they began having trouble and further delays with construction. Westinghouse, the contractor selected for the project, provided a revised plan and delayed completion date in Q1, 2017 which SCANA and Santee Cooper approved. However, Westinghouse filed for chapter 11 bankruptcy a month later.

In August of 2017, after a series of technical challenges, SCE&G filed for an abandonment petition with the PSC. This included a request to continue charging consumers $27/month for the money spent on the nuclear project. The following year saw a fight between the PSC, SCANA, Santee Cooper, and consumers. Currently, Dominion Energy is planning to buy SCANA Corp. Dominion Energy’s plan moving forward will lower consumers’ energy bills but would not refund anything charged up until now.

The story of the failed nuclear project made headlines for almost a year in South Carolina. This resulted in growing consumer distrust of utilities and regulators, with animosity reaching its peak as the Solarize campaigns ramped up. During the Solarize campaigns, news outlets talked about the failed nuclear plant deal daily and painted the utility companies and regulators in a negative light, pointing out that consumers had been paying extra fees for years and would never see the benefits of the $4.9 billion already spent.  This constant background talk, besides eroding consumer trust, also made it difficult to engage people in positive conversations regarding solar. According to SEIA, SC went from nationally ranking 8th in solar capacity in 2017 to ranking 18th in Q2 of 2018. The nuclear reactor is likely much to blame.

A fourth challenge flows from two mentioned above: while tailored messaging is key for the success of Solarize campaigns, crafting messages that resonated with SC consumers proved more difficult than normal. This was because, first, the lack of trust in the utility companies made people cautious in their engagement; and, second, the scattered nature of electricity supply made it hard to match campaign agendas with a neatly defined set of energy consumers. These two impediments often resulted in dwindling interest and, ultimately, inaction among many people who had initially expressed a desire to adopt solar.

Lessons for the future

That said, this may be a ripe opportunity with Dominion Energy entering the state to re-awaken this sleeping giant by re-evaluating incentives, net metering, and programs to reinvigorate solar.  It will take the support of government and utilities, and that is exactly how Act 236 was passed initially. We have heard that it takes a village to change paradigms and transforming our energy infrastructure is no exception. South Carolina has demonstrated it can support solar by leaders coming together. People in the state have shown interest in renewable energy, but they can’t do it alone. The question now is, can the new leadership help the sleeping giant of solar wake up again?