As you drive around these days, you may notice a growing number of homes installing solar panels on their roofs. In Connecticut alone there are over 23,000 residential solar installations.[1] In 2011, the Connecticut legislature mandated that the Connecticut Green Bank fund projects to produce at least 30 MW of solar by the end of 2022. By 2015, the Green Bank had supported over 80MW of installed capacity, seven years ahead of schedule.[2]

But why? Why do people decide to install solar? Over the last four years, Yale’s Solar Energy Evolution and Diffusion Studies (SEEDS)* team has interviewed thousands of people across Connecticut and examined administrative data on solar adoptions to shed light on this question. This work led naturally to a related question: Why do some communities install solar at much higher rates than others? SEEDS found that, for instance, middle-income families installed solar more frequently than low-income families, despite the fact that solar could be a profitable investment for either group.

Seeking an answer to why this is, the SEEDS team recently kicked off a new project funded by the U.S. Department of Energy SunShot Initiative to develop more effective ways to communicate with low- and moderate-income (LMI) communities about solar. (These were defined as annual household income below $50,000 and between $50,000-$75,000, respectively.) LMI communities forego solar for any number of reasons—financing issues, lack of access to capital, limited information, the complexities associated with installations on multi-family dwellings, low home ownership rates. We are interested in how peer-to-peer and Solarize campaigns might be applied to overcome these challenges.

Where better to start than examining what consumers have been telling us about solar? We examined over 2,400 online survey responses from Connecticut residents and focused on those who self-reported as LMI. The data raised some interesting questions. For instance, do LMI customers respond to the same messaging as other populations?

Across all LMI groups, the most common sources of information were print newspaper articles, community partner newsletters, friends or neighbors, town leaders, town websites, and attendance at an event. Very few LMI solar adopters (<10%) received information from online media articles, a postcard, a letter identifying their house as well-suited to solar, social media, installer, solarizect.com, YouTube, or letters to the editor.

These findings indicate that having a conversation with someone can very effectively transfer information. In both income groups, those who attended a workshop or event or spoke to a friend or neighbor about Solarize campaigns were much more likely to install than those who did not. Additionally, hearing about Solarize campaigns from a local source, such as community partner’s newsletter, made a big difference.

Moving forward, it’s obvious that we need to consider the medium through which we advertise and communicate about these campaigns. Although having personalized conversations is often the most difficult to implement at scale, as these findings show, having community representatives can be the most effective way to reach LMI populations.

Once the conversation is started, it’s also important to know why people are motivated to install solar. We asked for people’s rationales in the decision to install solar. For self-reported LMI respondents who either have installed solar or signed a solar contract, lowering the monthly utility bill, stabilizing energy costs over time, and concern for the environment ranked the highest (in that order). This ranking considers the totals from both low and moderate-income families, and, as noted below, there is actually interesting and important differentiation between these two groups. 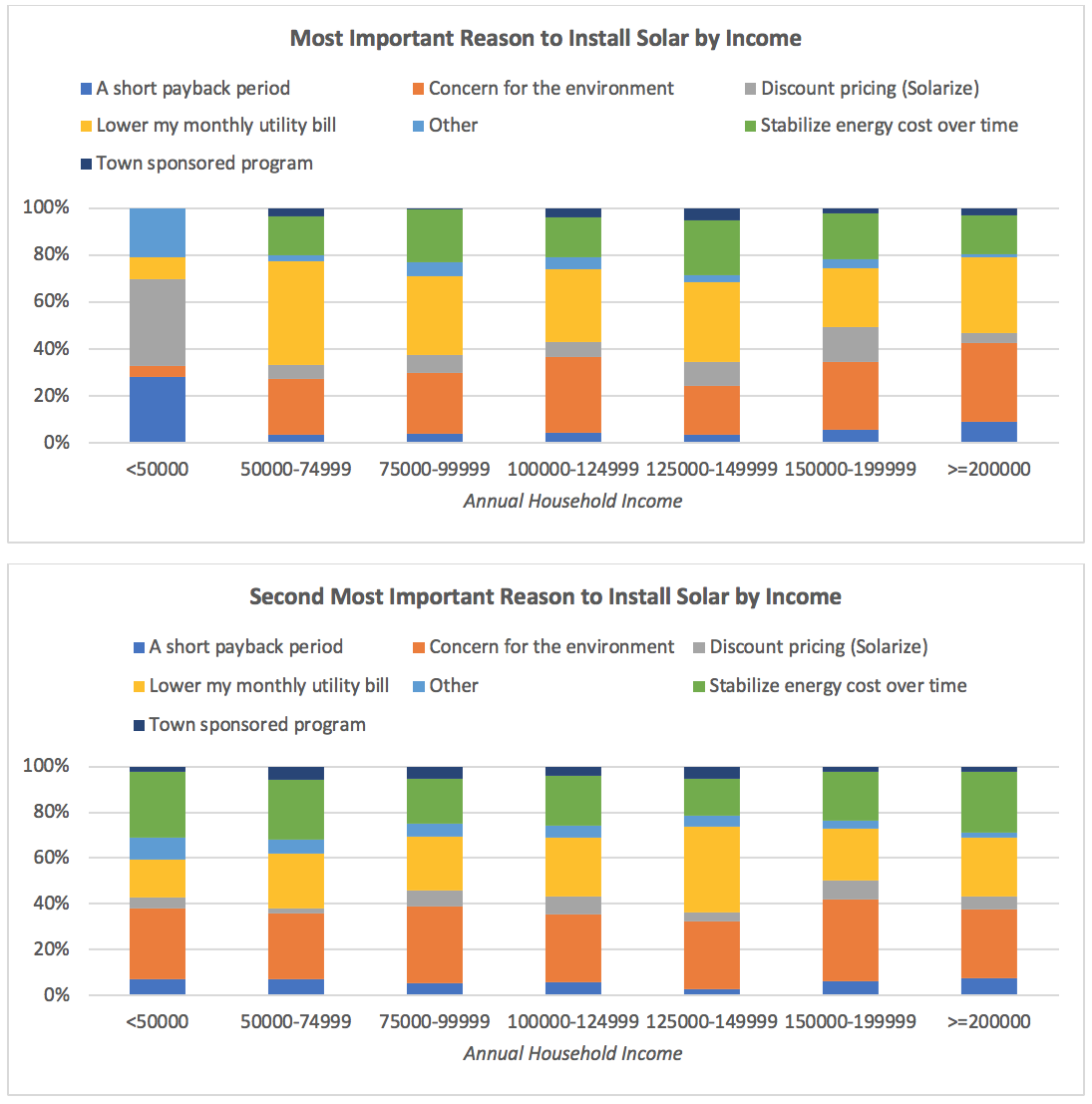 Importantly, there is a striking difference between low income and other income brackets when it comes to the primary motivation to install solar. Financial drivers, including short payback periods and discount pricing, are central justifications for a decision to install.

These data point to the conclusion that messaging for low-income customers must target financial drivers. Short payback periods, discount pricing, and other financial considerations help customers feel they are getting a good deal on an installation.

When we asked respondents who did not install solar the relative importance of a variety of factors, the most common answer for both self-reported LMI respondents was the “current cost of installing solar panels.” For moderate-income respondents, the second most important factor was the lack of energy savings.

Finally, stabilizing energy costs is an important driver for both populations. Often customers interested in cost stabilization choose to lease equipment. In our survey, only about one-third of LMI customer chose to lease. Given these responses, our future work will include an in-depth review of solar leasing. Is leasing truly a good fit for these communities and, if so, how can we better communicate how leasing works?

Low-Income Most Important Factors in the Decision Not to Install

Moderate Income Most Important Factors in the Decision Not to Install 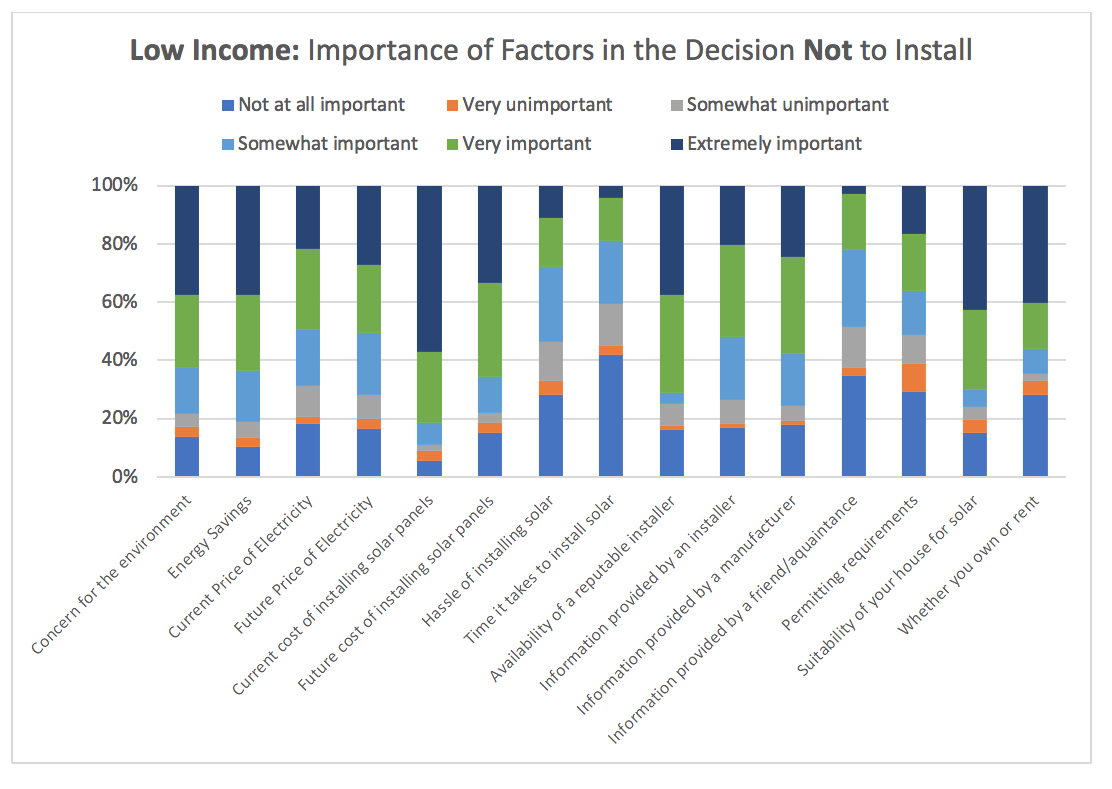 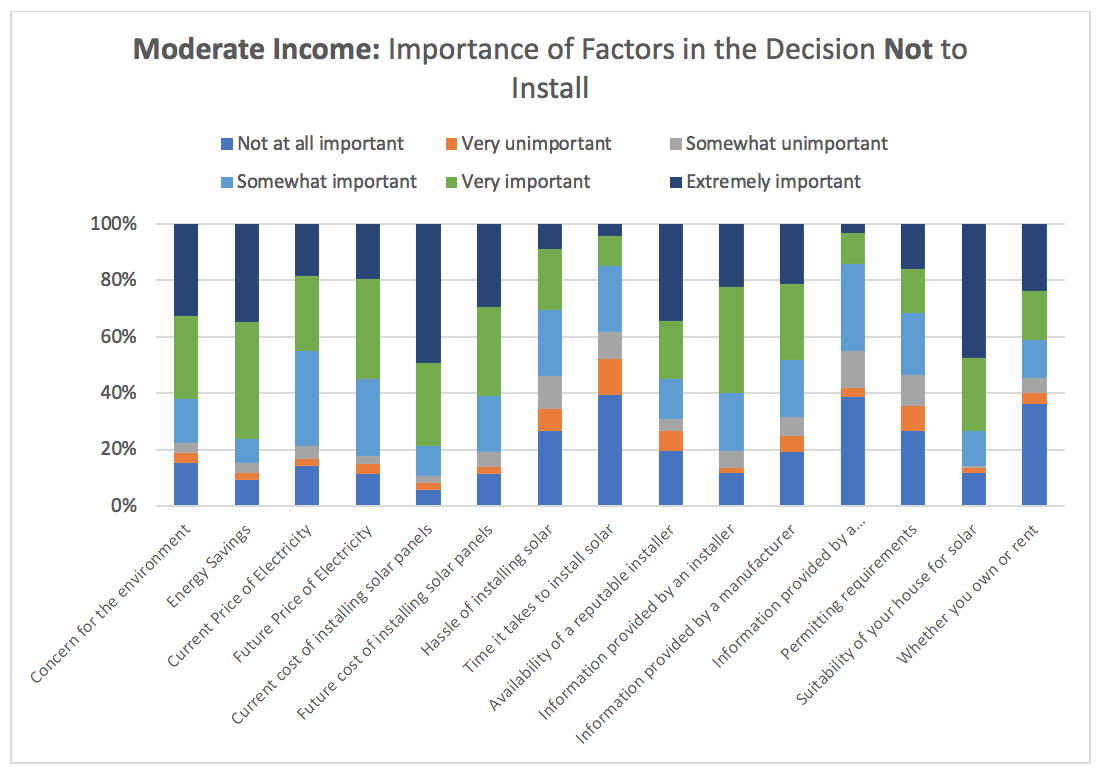 Reviewing all of this information together—by both groups who chose to either install or not install—highlights an interesting issue. How does the messenger or channel affect how the message is received? Does lack of information continuity feed into this problem? If installation costs and lack of energy savings are the primary reasons why people aren’t installing, yet lowering monthly utility bills and stabilizing energy costs over time are reasons that people are installing panels, where is the message getting lost?

Our findings so far suggest that effectively reaching LMI customers requires a focus on factual messages driven by financial motivation. With conversations started by peers, neighbors, and the community, it is possible for the message to be truly effective. In the coming years, we will focus on the community level to test out new messaging models and communication strategies. Hope to see you out there!

*This research was supported by the U.S. Department of Energy SunShot Initiative. 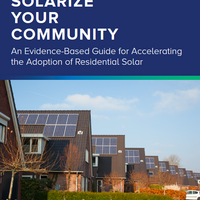