Headquartered in Mumbai, the Mahindra Group is a $17.8 billion federation of companies with a presence in over 100 countries and operations that span more than 20 industries, including automobiles, IT, finance and real estate. The flagship company, Mahindra & Mahindra Ltd., is one of the largest tractor companies in the world and the market leader in India for utility vehicles. In October 2016, Mahindra & Mahindra became the first Indian company to adopt an internal carbon price.

In conversation with Yale School of Management’s Senior Associate Dean For the Executive MBA, David Bach, three executives from Mahindra recently discussed the process that led to the adoption of a carbon price, lessons learned, and next steps. This took place as part of the “Internal Carbon Pricing: Practical Experiences from the Private Sector” webinar series. The representatives from Mahindra were Pawan Goenka, managing director; Vijay Kalra, chief of manufacturing operations; and Anirban Ghosh, chief sustainability officer.

At an investor meeting in 2008, the issue of triple bottom line was raised, prompting Mahindra to begin its sustainability reporting. Today, sustainability is firmly embedded in the company’s operations and vision, as reflected in its “Rise” mission slogan.

“Our approach to business is not just about market share and the bottom line, but a purpose beyond profit,” Goenka explained as the webinar began. “That is why Mahindra has adopted ‘Rise’: our core purpose is to innovatively use all of our resources to drive positive changes in the lives of our stakeholders and communities to enable them to rise.”

In October 2016, Mahindra & Mahindra—which accounts for 50 percent of the Mahindra Group’s total gross revenue and carbon footprint—announced it was adopting an internal carbon price of $10 per ton of carbon emitted. The carbon price is applied to all of Mahindra & Mahindra’s departments and revenues are used to invest in technologies and practices that reduce the company’s carbon footprint.

In part, this focus on sustainability fit with Mahindra’s goal to make the top 50 most-admired brands by 2021. But a strong business case also underpinned the decision. “As a manufacturing company, one of our major business goals is to keep cost under control,” Kalra said. “In India nearly 75 percent of commercial costs are from utilities such as water and energy. India also has a problem of energy shortages. Energy efficiency and conservation are therefore critical.”

Mahindra has several efforts underway to pinpoint the sources of and reduce energy consumption.  One such project underway is converting all plants to LED lighting. This is expected to cost $4 million with a payback under one year.

“All of our investments so far have had a clear financial justification. At least for now, the carbon price does not compromise any of our business interests,” Goenka said. “Some years down the line it may, when we run out of low-hanging fruits, but we are confident that we will be able to keep innovating.”

The results of this work have been reassuring. When asked to join the Energy Productivity 100 campaign, Mahindra reviewed its record and found its carbon footprint reduced by 44 percent in the past seven years. The company thus went ahead with commitments to double its energy productivity by 2030 and reduce its carbon footprint by 25 percent over the next three years.

Mahindra follows a bottom-up approach, with ideas often originating on the shop floor. ”Everyone is looking to reduce costs and wants us to support making that happen,” Kalra said. The carbon pricing proposal, for instance, came from middle management. And healthy competition between manufacturing units has driven energy reduction efforts across Mahindra’s portfolio. “Mahindra has 17 large manufacturing locations for automobiles and tractors across India,” Kalra explained. Once its business case became clear, all other units wanted to adopt the same measures.” Other units have taken the lead with water, biodiversity or green buildings.

To price its carbon emissions, Mahindra calculated the ratio of green investments over the past several years to its total emissions. Using past investments, which were made without a specific eye toward carbon emission, the price came out to $6-7. Mahindra then considered the additional investments needed to achieve its 25 percent emissions reduction target; this raised the carbon price to US $10 per ton.

Although Mahindra’s carbon price currently covers Scope 1 and 2 emissions, the company is integrating sustainability across its supply chains. “Sustainability is embedded in our supplier evaluation process and we have a reward system for high-performing suppliers.” Said Ghosh. “We have also applied this approach to our dealers.”

Mahindra is also aware of the carbon emissions from the use of its products – automobiles and tractors. It is the only company in India that sells four-wheel electric cars and is currently putting significant efforts behind electric vehicles.

Mahindra has garnered support from the Government of India and has assumed a responsibility as a leader in sustainability. “Other corporations in India are closely watching our efforts, and we hope that they will find this is the right thing to do as it makes great business sense,” Goenka said. Mahindra is sharing lessons learned with other corporations through company visits and conferences, and is preparing a Carbon Pricing Primer that will help other companies understand how to make a carbon price works for them.

Ghosh also advises fellow business leaders to look at utility bills: “Typically, a CEO never looks at the utility bills, they are just meant to be settled,” he said. “But there is gold in them.”

And stay tuned for the fifth webinar in this series by checking the CBEY website. 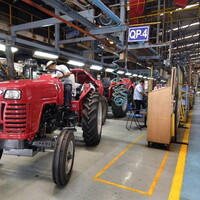 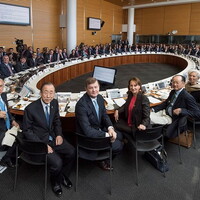