On a night when most of Connecticut fretted about the bleak, snowy forecast, 15 residents of Avon considered a bright, sunny future. They were gathered in the public library to learn about the Solarize campaign running in their town. Solarize, which has unrolled across the state over the last three years, is a community-based program that leverages the power of social interaction to motivate rooftop solar installation. Specifically, the program relies on a small set of volunteers known as solar ambassadors to drive the campaign. Through workshops, tabling at farmers’ markets, open houses and other events, the solar ambassadors reach out to friends, family, and community organizations who, in turn, spread the word to other friends or organizational members. The effect is like a rippling wave—word of solar expanding ever outward.

Or so I’d been told. As a research assistant for SEEDS, a project that is tracking the Solarize program, I had read a great deal about the relationship between social interaction and solar diffusion. But I wanted to see how this relationship works (or doesn’t) in person. On March 4th, I drove the hour up Interstate 91 from New Haven to Avon and slipped into the back row of the library to observe the campaign in action.

The workshop had already begun by the time I arrived. Barbara Welch, a solar consultant from Astrum Solar (now Direct Energy Solar), was walking the audience through the basics of how her company sites panels on roofs. She displayed a photo of a technician perched on a ladder and explained how the tool he held detects obstacles, like trees or neighboring buildings, that might limit daylight exposure. Hands shot up. Barbara recognized a clean-cut gentleman in the middle of the audience named Joel.

“There are a lot of trees here in Avon, and sometimes those trees fall and cut the power. What happens when the grid goes down? Can I run the electricity for my home off the panels?”

Barbara began to respond, explaining that the basic grid-tied system that Astrum offers does not allow one to power a home when the lines are cut, but then a voice interrupted her. “You can get batteries to act as a back-up system, but that, of course, adds cost. You’d want to do an analysis of whether it’s better to combine your panels with a battery system, or stick with a generator.”

The advice came from Bernie, whose snow-white beard glowed softly under the dimmed lights of the room. Bernie is a solar ambassador for the Avon Solarize campaign. He has outfitted his home with a solar hot water and geothermal heating system and he serves on the town’s clean energy committee. Joel shifted in his chair to direct more questions toward Bernie, who sat a few rows behind him. What about sizing the system for charging an electric car? Can homeowners’ associations present hurdles? What sort of impact do the panels have on a roof? Bernie answered each question and, after the exchange, Barbara moved on to speak about panel longevity. (Astrum aims for 25 years.)

“What about annual service? How often will I have to clean the panels?”

Barbara responded that cleaning panels is not as problematic in Connecticut as it is in, say, California, where conditions are much drier and dustier. In Connecticut, rain does most of the needed cleaning. The cost of cleaning solar panels could outweigh the benefits, anyway.  A 2013 study by the University of California, San Diego concluded that cleaning panels on a 5-kilowatt system halfway through the summer would only translate into a $20 gain in electricity production—easily exceeding the cost of cleaning. If a homeowner wanted the panels cleaned nonetheless, there are likely local resources available. Barbara stressed that the last thing she wants is for owners to be dangling from their own roofs with a brush in hand.

Another audience member chimed in.

“I’m six years into the ownership of my system and must say that I’m very happy with it. I’ve never had any major problems. What’s more, I’ve done the calculations on the equivalent tons of CO2 emissions that have been avoided as a result of my panels. I’d be happy to share those numbers with you afterward.”

Unlike Bernie, this fellow wasn’t a Solarize Avon ambassador, just an owner of a solar PV system excited about sharing his knowledge with other residents.

I realized that I was witnessing the Solarize model in action. Fellow members of the community—trusted messengers—were selling the benefits of solar just as much as Astrum. The complex social networks depicted in SEEDS research papers suddenly lit to life for me in the library room. I could visualize Bernie as a central node, connected with Joel; Joel, in turn, connects to members of his homeowner's association, some of whom perhaps attend the next workshop, or get in touch with Bernie. The solar network grows.

Barbara began to wrap up her talk, emphasizing that the Solarize campaign will come to a close in one month. After that point, Avon residents will no longer be able to take advantage of the $3.40 per watt offer; the average installer price in Connecticut is closer to $4.50 per watt. She then tossed out another incentive: “For the first 20 contracts, Astrum is offering a $500 rebate. To date, we have lined up 14 contracts in Avon, so there’s still time, but not much!”

A low murmur passed around the room. The hook appeared to have worked.

The lights came up. Some of the audience members grabbed their coats and headed for the door, but the majority lingered to chat further with Barbara, or with neighbors. I noticed Joel had moved back to speak with Bernie. They consulted for a few minutes before Joel shifted to the table where Astrum had laid out its materials. He filled out a contact sheet and walked by Barbara on his way out the door.

“Well, if you couldn’t guess it already, I’m very interested. I learned a lot from that presentation. Thank you. And thank you, Bernie!” he shouted across the room. “Let’s be in touch!” 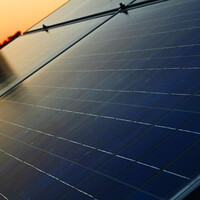 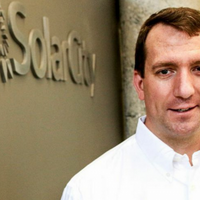