Sobotka Stories will introduce you to former recipients of the Sobotka Seed Stage Venture grants who share their experience and perspective. The Yale Center for Business and the Environment aspires to build a robust entrepreneurial community around sustainability ideas and is proud of its alumni.

We recently had the opportunity to catch up with Nathan Hall (F&ES/SOM ‘17) who won the 2015 Sobotka Seed Stage Venture Grant. Since receiving the $10,000 in grant funding, Nathan has been able to accelerate the production of hemp through his co-venture, Appalachian Roots – Hemp 2.0. By reintroducing a historically significant crop to the coalfields of Eastern Kentucky following state-wide (re)-legalization of hemp, local mountain farmers and unemployed miners will be able to accelerate ecological and economic restoration of the area with high-value markets and innovative growing techniques. “People in Appalachia are hungry for new opportunities in the wake of the near disappearance of the coal industry,” according to Nathan.

Appalachian Roots – Hemp 2.0 began in January 2015 when long-time friends Todd Howard and Nathan Hall teamed up. Initially they had very few resources in terms of capital, land and equipment. However, through their tenacity they found a way to plant four acres of Futura 75 hemp on mountaintop removal mined land utilizing a replicated trial approach with four different half-acre treatments on two distinct sites (2 acres each). The team successfully proved that hemp could grow on mined lands with low-cost organic inputs, and subsequently received a $12,000 grant from Patagonia to support the purchase of agriculture equipment.

Since then, Appalachian Roots – Hemp 2.0. has forged strong relationships with the KY Hemp Industries Association (KHIA) which has created the opportunity for sales of materials for CBD and biocomposites, while also working with Fibershed (a Patagonia partner) to develop carbon-negative growing techniques. Ultimately the company hopes to develop a local processing network to transform the raw crop into more valuable forms, from textiles, to its newer application in advanced biopolymer composites.

Nathan believes that the application process for the Sobotka Seed Stage Venture Grant was critical in helping them to flesh out an abbreviated business model. Prior to the application, the team had not considered various critical elements within a formal business plan/model. In addition, winning the competition provided them additional coaching sessions with CBEY’s executive fellow, Peter Boyd in order to formulate their strategic direction and specific approaches. Furthermore, the grant funding was instrumental in allowing the team to purchase hemp farming equipment.

One of the biggest challenges that Nathan and Todd continue to face is their geographical disconnectedness in executing a very physical project. Nathan is at Yale raising funds and engaging in the general business management, while Todd is physically planting, growing and nurturing the operations in Appalachia. The team has had to learn to be flexible with regards to the level of input each has at various times.

Finally, Nathan’s advice is to make sure that you have an idea with true impact that at least has some form of partial validation in the marketplace. That need not be a prototype, but a survey and/or mockup trial is a great start. In Nathan’s words, “We want to be part of the silver buckshot that’s going to hopefully transform this region” and based off the current success to date, Appalachian Roots – Hemp 2.0 is well on its way to creating something of tangible value at the intersection of business and the environment. 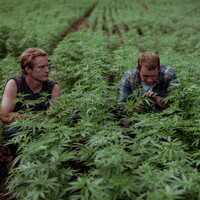