It was a big day for the Symbrosia team. It was early February 2019, and they had spent most of winter break setting up a brand new aquaponic-type system in a warehouse in New Haven’s Newhallville neighborhood. The previous afternoon, they had received a batch of baby shrimp, the first that would grow to maturity in the new facility. The shrimp were hard to spot—a few grey specks beneath hundreds of gallons of saltwater. It was hard to believe that, in just three months, those specks would become 52 pounds of restaurant-quality shellfish. To reach that size, they would need to double in size every day for the next several weeks. This was day one.

After checking on the shrimp, Alexia Akbay (YSPH 19), Symbrosia’s Chief Executive Officer, walked to an adjacent tank and grabbed a handful of reddish orange seaweed. She described how these two organisms would eventually support one another in a continuous loop. Waste from the shrimp would nourish the seaweed, and the seaweed would in turn filter the water going back to the shrimp.

Alexia explained that, together, these two organisms can have a huge impact in fighting climate change, particularly the seaweed. When added to cattle feed, a type of seaweed called Asparagopsis taxiformis can reduce methane emissions from cows by up to 99%, and methane is a greenhouse gas that’s 20 to 30 times more potent than carbon dioxide.

In fall 2017, Alexia learned about the benefits feeding seaweed to cattle while engaging in one of her favorite pastimes: research. “I like to read emerging scientific papers—a lot,” she said.

When she came across the potential for reduced emissions, she didn’t just see an interesting scientific finding. She saw a business opportunity. Researchers had documented the methane-reducing effects of different seaweeds, but no one had a plan for introducing them to the market.

“There was a gap on what to do next,” said Alexia.

She had just started her Master’s in Public Health program, and she was passionate about solving the climate crisis, so she began to tell some similarly minded friends about what she had learned. Victoria Shirriff (YSPH 19) recalled that Alexia initially approached her in the library, and since then she’s enjoyed turning that initial spark into a reality.

“Seeing something that was just an idea come to fruition has been so rewarding,” she said.

In October 2017, Alexia, Victoria, and two other classmates applied for a Climate Change Innovation Seed Grant through CBEY, under their original name Moo-ve over Methane. They were awarded $3,000, which enabled them to test their concept more seriously.

“It was a confirmation that this was an idea we should continue to explore and build upon,” said Alexia. “From there it was many hours of intense learning.”

Over the next few months, they talked to researchers, farmers, and small business owners to design their technology, while additionally fleshing out their value proposition and theory of change. As the venture matured, the group changed their name to Concha Aquaponics. The team composition also evolved, and Alexia brought on Gracie White (YC 16) as a co-founder, drawing on her experience in the aquaculture industry.

By spring 2018, they were ready to apply for the Sabin Prize. They come a long way, but they remained modest. After getting selected as a finalist and even after being granted the $1000 audience choice award, Alexia still didn’t think they would walk away with the $25,000 prize.

“When we did win the Sabin, I teared up,” said Akbay. “It was just very overwhelming to think that all of the work that we had put in for the past however many months would be given an opportunity to take shape.”

The Sabin Prize yielded funding, connections, and publicity that helped Akbay and her team to catapult the business to another level. Shortly after the competition, multiple major companies reached out about potential partnerships, and a faculty member nominated Alexia for a Pritzker Emerging Environmental Genius Award. Over the summer, Alexia and Gracie participated in the Tsai CITY Summer Fellowship, where they focused on developing strategies to capture value. They also changed the name of the venture once again, from Concha to Symbrosia.

In fall 2018, Gracie began a master’s program in California and took on more of a high-level strategic role, while also establishing connections on the West Coast. Meanwhile, Alexia built out the operations in New Haven, where she tackled the challenge of finding a physical space for the aquaponic system. She also added many new members to the team, including an experienced Chief Financial Officer, a squad of undergraduate interns, and the team’s first full-time employee, a recent Yale engineering graduate named Jonathan Simonds (YC 18). When I visited Symbrosia in February 2019, Jonathan had been working especially hard to take care of the new shrimp. He had been in the facility until 2 AM the previous night, and he had returned at 6:30 AM that morning.

“It’s not a 9-to-5 job or a conventional job out of college,” he said, laughing. “It’s way more fun and interesting, and also a lot of work but super rewarding.”

As Alexia sat in Symbrosia’s office, surrounded by her teammates and an up-and-running system, she reflected on how far the team had come in the past year and half, from the time when it was just an idea that she had formed by reading scientific articles.

“The Sabin was instrumental in getting us to where we are now,” she said. “It was the main driver behind our proof of concept and our ability to be here in this space.”

In addition to relying on her team, Alexia has also found support from other Yale students who’ve founded environmentally focused ventures, such as  Forested Foods, Raise Green, and Stake. She told me that she would like to see a more intentional community for entrepreneurs who’ve made it through the early stages of developing an idea and are now reaching the next level of starting a business. For now, their informal affiliation has been enough to keep her going.

“There’s a joke among the environmental entrepreneurs that we’re at war,” she said. “Climate change is our generation’s Vietnam.”

Their opponent is a status quo of environmental degradation. For Alexia and her peers, environmental impact is inextricable from economic viability. Their businesses create inherent benefits for people and the planet, particularly as they reach larger scale. Like the tiny shrimp in Symbrosia’s facility, these businesses can grow rapidly with the right support. It’s the potential for transformative impact that drives Alexia and her team forward.

“We are creating a business model that’s main purpose is to reduce GHG emissions,” she said. “It’s not only about upgrading your facilities or marketing a product to consumers that’s a little bit better than it was before. It’s about creating business models that are a solution.”

Photos taken by Minshu Deng, FES 20 (with the exception of the photo from the 2018 Sabin Prize competition) 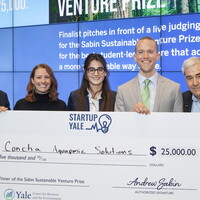