Attending a sustainability conference was at the top of my business school bucket list and I was ecstatic when I received the opportunity to attend the climate conference: I spent four fantastic days at the 26th Conference of the Parties (COP26) in Glasgow. The 2021 United Nations Climate Change Conference gathered world leaders and countless nonprofits/NGOs, with many believing this to be the world’s last chance to get climate change under control.  I did not expect ambitious climate change commitments from COP26, given the lackluster G20 meeting held in Rome immediately preceding the summit. This was unfortunately the case. Regardless, it was energizing to be at the conference in person, given how critical this decade will be in the fight against climate change.

The venue itself was massive and had three key sections. The core of the summit consisted of delegates coming together to negotiate on emissions commitments and targets. Many of these negotiations were (unsurprisingly) closed to observers, but significant gatherings of thought leaders still occurred through open pavilions throughout the conference Each country had its own pavilion where daily events were organized around specific topics. Then there were the side events which were typically organized by businesses and nonprofits/NGOs. With at least 40-50 events occurring at any one time, it was incredible to see the numerous discussions on climate change and potential paths forward.

Given my interests in empowering women and corporate sustainability, I chose to attend events that focused on these topics. I was fortunate to have attended the conference (as one needs a badge to participate at COP) with GenderCC – Women for Climate Justice, an organization that fights for gender equality, women’s rights and climate justice. One panel (which included Gotelind Alber, founder of GenderCC) I found particularly impactful was “Engaging Citizens in Urban Climate Action for Inclusive Just Transition Programs.” Climate action needs all citizens to be actively involved, including vulnerable groups. Unfortunately, gender thinking and climate change are often seen as mutually exclusive; emphasizing this intersection needs to continue as vulnerable groups, such as women and minorities, are more likely to be affected by climate change. Katharine K. Wilkinson, co-editor of “All We can Save,” articulates that “the climate crisis is not gender-equal or gender-neutral.” The top 1 percent of income earners globally, who are overwhelmingly male, are responsible for more carbon emissions than the bottom 50 percent of earners.” This emissions gap is bigger than ever- according to a United Nations report, this top 1% accounts for 15% of emissions globally, which is more than the 3.5 billion people at the bottom 50%. Women bear the brunt of climate change, including displacement as 80 percent of those displaced due to climate change are women. Women (including other minorities such as people of color and indigenous people) have had limited influence when it comes to shifting the status quo as those in power tend to, and continue to be, men. Beyond impact, men also contribute more towards climate change: New York Times reporter Lauren Jackson declares that, “men have a larger carbon footprint than women, by 16 percent, according to one study. Given this, I had expected and hoped for more progress on gender as climate change will not be solved without empowering women.

My three key takeaways for the conference include:

Overall, attending my first COP was an exciting experience. I loved being surrounded by thought leaders and activists, and being a part of the countless discussions that were simultaneously taking place. One day on the train back to Edinburgh, I started chatting with those near me, who turned out to be party members from a Middle Eastern Country attending COP26. I ended up grabbing dinner with one of the delegates, where we discussed climate change and the roles various countries were currently playing, something that would have seemed so surreal only a few weeks ago. COP26 was a very invigorating experience and I’m thankful I had the opportunity and support to be a part of this. I do believe that, unsurprisingly, COP26 fell short- we are certainly not on track to tackling the climate crisis. Are we at a better place than where we were a few years ago? Absolutely. In 2015, the private sector was not engaged, there was little talk of innovation, and the topic of adaptation was nonexistent. There also were some substantial commitments that did result from COP26, such as the methane commitment – over 100 countries pledged to cut their annual methane by 30% which could prevent 0.2 degrees Celsius of warming by mid-century. This is important because methane is second largest contributor to climate change, after carbon dioxide. While this will have a shorter-term impact, as methane only stays in the atmosphere for a bit over a decade (vs. over a century for carbon dioxide), methane is still 20 times more potent, making this a significant action nonetheless. This is not to say it is perfect – there is lack of transparency on data and measurement. Gotelind Alber expressed that “inventories of many countries are not necessarily correct because they overestimate the carbon intake from forests and other ecosystems. It’s very hard to measure.” Furthermore, a Washington Post investigation revealed that many countries are drastically underreporting their greenhouse gas emissions. So, I’ll end with this statement that a panelist shared while at COP26 which I believe is especially relevant for those who live in the developed world: “You all sit in a seat where you can make a difference and that’s a privilege. So use it.”

Thank you to GenderCC and Yale University (Center for Business & The Environment, School of Management, and School of Environment) for their support. 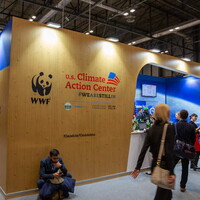 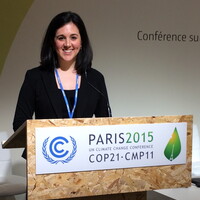