A business plan that aims to turn food waste into new products, and profits, won the 2016 Sabin Sustainable Venture Prize.

Renewal Mill, created by two members of the Yale School of Forestry & Environmental Studies (F&ES) community — Sumit Kadakia ’16 M.E.M./M.B.A. and Claire Schlemme ’11 M.E.M. — is working to identify and convert products found in existing food waste streams into new wholesome and nutritious foods. Their first goal is to commercialize the conversion of okara, or soy pulp, into a form of flour.

In addition to a $25,000 cash prize, the business receives automatic entry into the Yale Entrepreneurship Fellowship.

Another prize finalist, Appalachian Roots—Hemp 2.0, which was co-led by Nathan Hall ’16 M.E.M. ’17 M.B.A, won the audience’s choice award. Hall, along with partner J. Todd Howard, is developing technologies to grow sustainable hemp in regions of Kentucky affected by the downturn in the coal industry.

The Sabin Prize was one of four prizes awarded during Entrepreneurship Across Yale, a two-day series of contests that invited world-changing ideas from across the Yale community. The prize is managed by the Yale Center for Business and the Environment (CBEY), which is based at F&ES and the Yale School of Management.

Other finalists included Hugo & Hoby, an e-commerce company that brings together foresters, designers, and craftspeople to build sustainable furniture and home furnishings; and Smart Air Filters, a company that has created a more effective fan to reduce household pollution levels across China and India.

Judges on the panel, including Andrew Sabin, president of the Sabin Family Foundation and founder of the Sabin Prize, said all four proposals are credible business plans.

“The quality of the business plans has risen steadily,” said Ralph Earle III ’84 M.P.P.M., managing director of the Clean Energy Venture Group, who has served as a judge for all eight Sabin Prize contests. “And this year was by far the most impressive group that we’ve seen.”

The Renewal Mill creators, who met while working at the same startup several years ago, both said the path to achieving a more sustainable economy must begin by addressing food-related challenges.

“When you are trying to stem climate change or make a big environmental impact it’s really impossible to do that without changing the food system,” said Kadakia. “With all the advancements in energy technology and transportation, if we don’t change the way we eat, the way we process food, we’re not going to be able to stem our society’s impact on the environment.”

For starters they have targeted the re-use of okara, a mix of fiber and protein left behind when soymilk is strained from cooked and blended soy beans, into flour.

“And we hope that once we get that off the ground we can expand into other products, whether that be potato skins or olives or grapes,” said Kadakia. “And, really, the universe of food waste is extremely large, which is exciting. Because it gives us the opportunity to look at more products and more applications.”

And the business opportunities, Schlemme said, are encouraging. “A lot of initial research that has been done in academic settings has shown the potential that a lot of these food waste streams have for being much higher-value products,” she said. 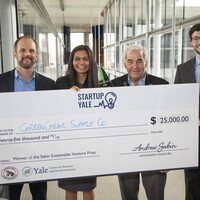 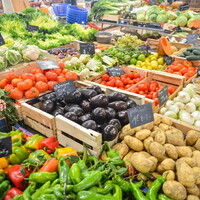 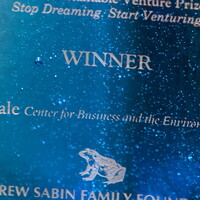 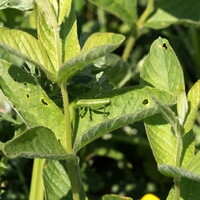