Floods are the most destructive natural disaster in the U.S., averaging more than $8 billion in annual damages. The infrastructure designed to mitigate flooding is old and underfunded, while natural barriers, like wetlands, have been stripped away by coastal development. Extreme weather events and rising ocean levels will only amplify the challenges in coming decades.

Federal, state and city governments are meanwhile responsible for flood management: the Army Corps of Engineers builds and maintains most infrastructure, while the Federal Emergency Management Agency subsidizes flood insurance. In today’s fiscally constrained environment, the outlook on coastlines is not optimistic.

“The idea itself is drawn from a number of areas,” said West. “We wanted to strike a balance between innovation and something digestible to investors.”

The team, one of ten in this year’s finals, presented its project on April 17 at Morgan Stanley in London. The following has been edited for brevity and clarity.

What does flood infrastructure look like in the U.S. today?

Sarah Wilson: Right now, flood infrastructure is mainly funded by either federal, state or city governments, and it’s almost all gray infrastructure. So that means things made out of concrete and iron, things that rust and fall apart. That’s been the case now for decades.

Natural infrastructure is an alternative, and the basis for our project. One of the main agencies in charge of work around flooding is the U.S. Army Corps of Engineers, which is why we’re targeting them with our idea.

Meaghan McGrath: In many places, the natural ecosystems that once performed flood-mitigation functions no longer exist. Coastlines have been built up and people have moved into these areas. So the Army Corps must replace what was once a natural barrier with something built, like seawalls and levee systems.

Can you give us a snapshot of your project?

Heather West: We’re proposing a flood mitigation bond that would solve the challenge of not enough funding going to natural infrastructure projects around coastal communities. The basic idea is that we would raise a $200 million bond offering for institutional investors, and then contract with third-party engineering firms like AECOM and CH2M Hill to then build these large infrastructure projects—mainly wetlands and oyster reefs. Two entities that would help pay for this bond would be the Army Corps of Engineers and FEMA, which is involved in disaster relief funding. We also have a third revenue stream from ecosystem service projects, whether hunting, oyster sales or potentially biodiversity credits.

Can you provide a little bit more background on how those credits would work?

SW: It’s actually a pretty small piece of the proposal, but one of the reasons a lot of projects like these don’t get built is because they’ve historically been expensive, and it’s been difficult to prove that the economics work out. So including additional revenue streams increases returns for private investors and attracts them to a space where they may have otherwise been uninterested.

Another key piece of the idea is that the government agencies that we’re working with would stand to save a lot of money by investing in these projects. The Army Corps would typically build gray infrastructure, but natural infrastructure is more affordable. And FEMA right now is spending a lot of money on flood insurance subsidies and disaster relief, both of which would go down if there were an oyster reef or wetlands protecting a really high-value community. This is kind of like monetizing future savings for these agencies and using that to attract private investors.

You mentioned high-value communities. Your project is focused on the New York Tri-State area [New York, New Jersey, Connecticut]. Why is that?

HW: For a number of reasons. We were looking for an area where impact might be highest, both environmentally and socially. The vast majority of the Tri-State coastal area was once covered in oyster reefs, since destroyed, and the number of people expected to live there is growing. So this gave us the potential for high impact.

We were also looking for places where there was political will. The governors in all three states have indicated they want natural infrastructure; they want to prevent big flooding damages in the future.

SW: Hurricane Sandy was a wakeup call. I think that Sandy inspired a pipeline of potential projects—something that’s very important for us because we don’t necessarily want to spend a bunch of time or money finding projects. We would instead love to have this pipeline that New York, New Jersey and Connecticut has already put together.

If this were implemented and perfectly executed, what would you expect to see in 25 years?

MM: Certainly, all the projects will have been developed. But the nice thing about natural infrastructure—and where it really benefits the Army Corps—is that these projects only improve as time goes on. As vegetation grows and as ecosystem functions become stronger and more robust, they provide more and more protection into the future. So what we’ve modeled out in this bond is a base level of savings from early days, but after 20 years is when the maximum benefits will be realized and accrued to the Army Corps and to those individuals living on the coast.

How did this team come about?

Julie Andress: Meaghan organized a session to host the coordinator of this competition. She came from Kellogg, and introduced a group of about 40 students at SOM, as well as some people from F&ES, to the project. During that session, a few teams formed.

Meaghan, Heather and Sarah are in the joint degree program and some of us have worked together before, so our team formed organically based on background, shared interest and a belief that we would work well together.

SW: Which I think has proven to be the case.

And what about the flood mitigation idea?

MM: We met before winter break, to talk about some initial areas to research. Heather

and I had worked in the conservation finance world before, so we came with some topical ideas of either grasslands or restoration projects. I’m not sure exactly when we decided to look at coasts and flooding, but it was in a single meeting that we got really excited about it. And we went with it.

JA: Throughout the development of the project, there were coincidentally a number of classes and events at F&ES in which the subject of natural infrastructure came up. This also made us more excited about the idea, and compelled us to look into it further.

So how were F&ES, SOM or CBEY able to support this work?

HW: I think the case competition speaks to a larger contingent of people on campus that is thinking about these issues—a group that is really bridging the gap between finance and what’s happening at F&ES. [See the Conservation Investing Student Interest Group.] For instance, we weren’t the only team from Yale to enter the contest. There is a lot of momentum on the student side in support of this space. And I think centers like CBEY, along with individual professors, are increasingly excited about it as well.

MM: CBEY has also been helpful in suggesting people to reach out to. Across the two schools, we’ve been able to talk to a lot of alumni who have been willing to provide feedback. It certainly surprised all of us how much time alumni put into talking to us on the phone, writing up their thoughts and ideas or connecting us to other people.

SW: In some cases, there has even been interest from people to see where this could go after the competition is over.

JA: Along with internship offers. 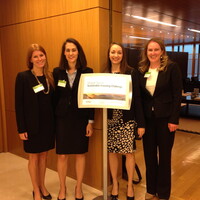